Essential Questions: What does the ability to persevere do for our lives? What role does perseverance play in the success of heroes?

A PICTURE IN WORDS Saint George and the Dragon is a treasure trove of figurative language!

Create your own version of Saint George and the dragon in image and story.

Investigate as an artist, reader, and writer the following questions.

1.  How do storytellers and writers make their stories exciting?

2.  What does it mean to “paint pictures with words”?

3.  What is a “good deed”? What good deeds have you done or have been

5.  How are fictional and real-life heroes different? How are they the same? 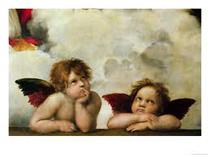 LESSON OBJECTIVES Students will be able to:

• explain the function and meaning of a coat of arms

• translate concept of coat of arms into their own lives

• design a symbolic coat of arms for a shield

Look closely at the Trina's illustrations, what is on Saint George's Shield?

A knight’s coat of arms became his identification. It indicated pictorially his family lineage and therefore indicated what side he was on. The coat of arms was often embroidered on a cloth tunic, or surcoat, or painted on his wooden shield. Depictions of or invocations to various saints can be found on many pieces of decorated armor 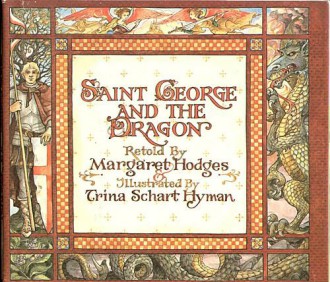 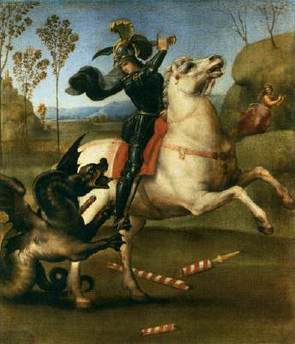 Saint George is one of the most popular of Christian saints and is the patron saint of England. He was also a favourite subject of Renaissance artists, who depicted him slaying the dragon. According to legend, this monster infested a marsh outside the walls of a city and, with his fiery breath, could poison all who came near. In order to placate the dragon, the city furnished him with a few sheep every day. But when the supply of sheep was exhausted, the sons and daughters of the citizens became the victims. The lot fell one day on the princess, and the King reluctantly sent her forth to the dragon. Saint George happened to be riding by and, seeing the maiden in tears, commended himself to God and transfixed the dragon with his spear.

St George's lance has been broken in the struggle, but the proud knight is about to vanquish the dragon with the sword, and so free the princess, who is fleeing on the right. By the middle of the 16th century this panel formed a pair with Raphael's St. Michael. Even though the latter was painted somewhat earlier, the fact that they are the same size and have a comparable iconography implies that Raphael intended that the saints should belong together. From Lovure.France

Knights were expected to behave in certain ways.  He had certain duties to perform to:

1) His countrymen and fellow Christians.  He had to be a servant to his lord, be courageous and brave, fair, and protect the weak and poor.

2) God.  He would have to be faithful to God, protect innocent people, be faithful in his church, be giving, and always obey God (over his lord in real life).

3) Women.  He would have to serve a lady, perform acts of bravery to win her heart, be gentle and gracious to all women, marry her and protect her forever.  This is the root of chivalrous behavior such as standing when a women enters the room, opening a door for a women, helping her remove or don her coat, carrying her load, and many other things.

Read the story and take notes on the parts of the dragon using a brace map:

Why are the wings special or important in the story?

Why is the tail special or important in the story?

Why are the claws special or important in the story?

Why is the head and the mouth important in the story?

Who can think of a way to use their whole body to make the Dragon's tail?  (At this point I take volunteers, who demonstrate different ways of "becoming" the Dragon's tail.  Eventually, usually without coaching, they realize they can make a longer tail if they work together.  I don't move on until we seem to have exhausted the group's ideas.)

Who can think of a way to use their whole body to make the Dragon's Wings?  Claws?  Mouth?  (I give each as much time as seems appropriate.)

Building a Dragon
Once we have explored each part separately, I tell the class we are going to make one Dragon out of the whole class.  I take volunteers to become each wing, each claw, the head, the body, and (with whoever is left) the long tail.  Each person makes his or her body part in the way that he or she wants.  (In other words, I don't try to make sure that the left wing looks like the right wing, etc.)

When the "Dragon" is finished, we carefully practice moving about the room.  It takes some work, but usually Kindergartners can do it with concentration.

Finally, we act out the epic battle between Knight (the teacher) and Dragon.  There are four major confrontations, during each of which a different body part is affected.  The whole thing is done in slow motion and carefully.  I choose the more alert "wing" and "injure" it with an imaginary sword.  That child pretends to be an injured wing, and the Dragon flies in circles.  The "tail" swings around to stab at me with its "stings" and I hack off one or two children, who wriggle on the ground separate from the rest of the Dragon.  I hack off the most alert "front claw" in the same way.  Finally the dragon opens its "mouth" and I run it through.  It generally dies a noisy death.

In order to finish off the lesson on a more positive note (not that the students care, but it makes me feel better) I usually have them act out the peasants celebrating after the Dragon is dead

Who can be the Hero?

Write an argument for which version is the most appropriate for today's child.

The middle ages were the time period between AD 400 to 1500.  Be sure to put it somewhere on your timeline!  (Knights did not begin to wear metal body armor until after 1300, so that might be a good place to put some memory of Saint George.)

This time in history was characterized by a feudal society.  In a feudal society, the king awarded land grants to his most important nobles, his barons, and his bishops, in return for their contribution of soldiers for the king's armies. At the lowest of society were the peasants (also called serfs or villains). In exchange for living and working on his land, the lord offered his peasants protection

The first castles were built in AD 900.  They were originally wooden and called “keeps.” About 100 years later they began to be built of stone and had walls that were 3 feet thick or more!  They usually included towers, a keep (the strong, central tower), a chapel, the gatehouse (where the guards lived), the great hall (where everyone ate and servants slept), the kitchen, and the stables.  They were surrounded by a moat that could only be crossed using the drawbridge. A castle would house several families and have additional houses built in it for others.  Castles were built as fortresses for protections during battle, houses, or prisons.

Create your characters and a fairytale setting

How to Paint a Watercolor Landscape

We are going for a mystical, fairytale look of "Once upon a time...."