Kinetic Art is art created to move. The motion  in the artwork may be caused by a viewer, wind currents, water flow or by mechanical means. 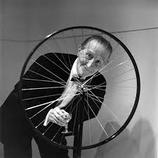 The first kinetic sculpture was created in 1913. The artist was Marcel Duchamp. He mounted a spinning bicycle wheel onto a stool. Viewers made his wheel turn. He continued to experiment with motion using pulleys and motors

Of a Goose who’s traveled through time

Are we from the past?

Or are we from the future?

What we are is Steam Punk

We are artists, sculptors, inventors

But, most of all, we are thinkers!

Give art to your kids

And let them fly

What if Jack and Jill used a simple machine to get their pail of water? Or mother goose used a propeller to help her fly?

Learn about Artists who were Scientists

So What Will You Make?

Research how to do it

Give it a Try- build it

But what if in the future we had to go back to using inventions developed in the Industrial Revolution?

Am I talking Fiction? Yes a kind of Science Fiction called "Steampunk!"

Æther Feature – An Ode to Steampunk

Steampunk is an inspired movement of creativity and imagination. With a backdrop of either Victorian England or America’s Wild West at hand, modern technologies are re-imagined and realized as elaborate works of art, fashion, and mechanics. If Jules Verne or H.G. Wells were writing their science fiction today, it would be considered “steampunk.”

From the website of The Ministry of Peculiar Occurrences

All that is Left is for You to Tell Your Tale

Found Objects: leaky watering cans, broken shovels, rakes, sprinklers, and various cans and bottles. We used all kinds of lids, ping pong balls and golf balls. We got very lucky in that I found battery operated novelty fans at Dollar Tree. The motors for the most part worked to spin whatever part they wanted to spin. For the exceptions we used hobby motors, battery holders and improvised wiring with alligator clips. My husband did the spray painting as that it is not safe for kids to do.

The fourth graders were responsible enough to learn how to use the hot glue gun, wire cutters, pliers, hammers, screw drivers and the staple gun. A few projects due to their weight needed extra drilling and bolting; Mr. Schellenberg lovingly did that for us too.

The students learned about electrical circuits, (highways for electrons.)  They created technical drawings of the battery, motor, wire, and switch in open and closed positions. They then drew the circuit  labeling all those parts through which the electrons would flow. They drew the part of their sculpture they wanted to spin; for Old Mother Hubbard it was her bone in the cupboard, for Pussy Cat, it was her tail! Then we put in the batteries, and watched our sculptures come to life!

Teacher Tip- Have kids sign bases with sharpie. Have them collect from presorted bens all of their found objects and place them into plastic bags that can be labeled and tied.

When cutting and bending wire students must be able to turn a complete circle with arms extended and not  touch anyone before working.

Have four to six hot glue gun stations so  lines don’t get too  long.

Okay….here is the final word… Art teachers really are all that, we can take chaos and give birth to stars. Make messes and shine!