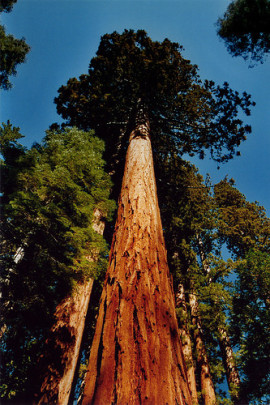 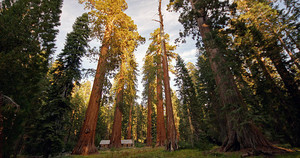 Read the following text taken from Save the Redwoods organization’s website. As these giant redwoods are our neighbors, it is important you get to know them. When you grow up as Californians, their care/preservation will be entrusted to you.

Giant sequoias can live to be 3,000 years old; the oldest recorded specimen exceeded 3,500 years. Trees this old started growing in the Iron Age, when humans learned how to use iron in tools.

Giant sequoias grow so large because they live a very long time and grow quickly. To thrive, giant sequoias require thousands of gallons of water each day (the average American uses 80–100 gallons daily). They get the water they need from the Sierra snowpack that accumulates over the winter months and soaks into the ground when it melts. Because they need well-drained soil, compacting the soil by walking around their shallow roots can damage giant sequoias.

Fire is an important element of the giant sequoia forest. Naturally occurring fires create openings in the forest, allowing young giant sequoias to establish themselves. Fire suppression policies in recent years have increased the growth of dense, brushy undergrowth and reduced the likelihood of giant sequoia regeneration.

John Muir, renowned naturalist and extensive explorer of the Sierra Nevada, was in awe of these giants. "There is something wonderfully attractive in this king tree, even when beheld from afar, that draws us to it with indescribable enthusiasm; its superior height and massive smoothly rounded outlines proclaiming its character in any company; and when one of the oldest attains full stature on some commanding ridge it seems the very god of the woods."

The native people of California did not usually cut down coast redwoods, but used fallen trees to make planks for houses and hollowed-out logs for canoes.